Attended a friend who has the nickname Sailorboy's wedding. It was such a light-hearted church wedding. We could not believe what they said during their vows! 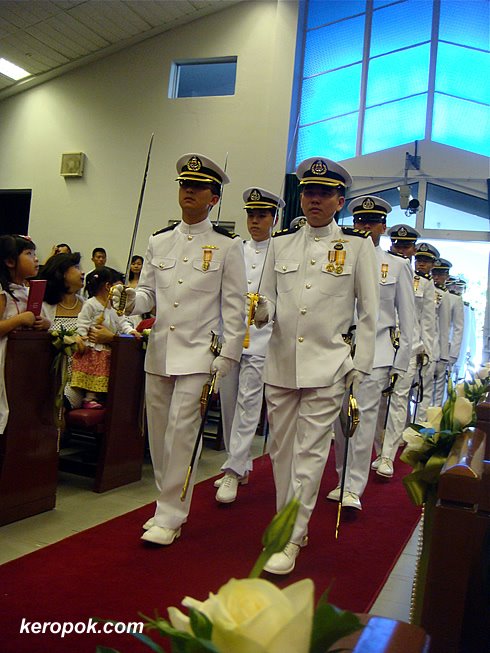 The above is the Sailorboy's mates from the Republic of Singapore Navy giving him the Arch of Swords after they march in. Really really cool!

As usual, friend's face photos do not appear here. :-)

Email ThisBlogThis!Share to TwitterShare to FacebookShare to Pinterest
Labels: Wedding

It must have been a grand wedding!

That's quite an honour for the wedding. The sailors look so neat and perfect.
Wow, what a wedding! You must have had a great time.

i didn't know they allow swords in church!

But what did they say?

Very lovely wedding march. I guess my son would like that too when he married.

yeah, it was a great wedding.
those are ceremonial swords I think.

Ooh, they look a bit on the serious side!

I agree with Kris, I want to know what they said in their vows now!

The navy boys of course had to look serious.

But the bride and groom was a bit too 'unconventional' on their vows. Can't say it here. LOL...

Keropok Man,
If you are single maybe you should start practising, so that you say it right to your better half next time.
If you are married, then practise what you said x years ago :-)