How many things do you know that is 100 years old?

Well, this was created to commemorate a 100 year old institution. The Centennial logo for the National University of Singapore. (fondly known as NUS) 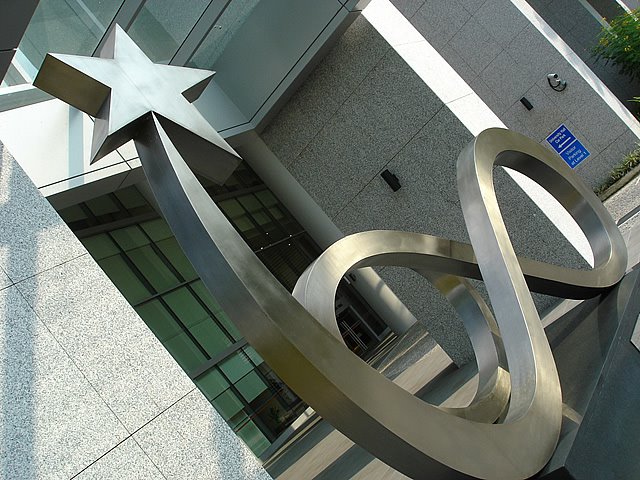 The 100 character is formed in an infinity sign. How clever!

100 years and many things have changed. NUS is ranked the 22nd in the Times Higher Educational Supplement of the World's Top University. It is also the top 3 university in Asia and Australasia by Newsweek.

Update (6 October). The Times Ranking for this year is out. NUS has moved up to positioni 19th in the world's best universities!

After posting the above, I found a picture in my archive. Yesterday's mouse, it tried to eat my food! This picture dedicated to tanty from Stavanger DP & Jing from Shanghai DP who loves the white little mouse. 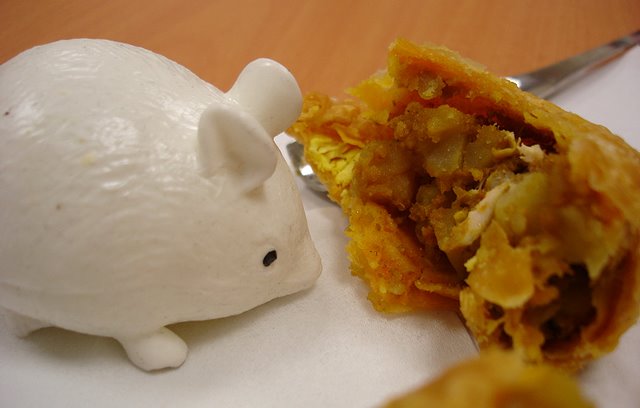 The little white mouse tried to eat my curry puff. No wonder the mouse seems to be getting fatter and fatter.

You have some REALLY interesting pictures! Thanks for visiting my blog, too.

the mouse is cute but the curry puff is more appealing to me.. ;-)

Thx for showing another photo of the cute white mouse~~~
And is there any celebrations for the 100th anniversary of NUS??
nice shot!!
...Jing

That logo is brilliant! Thanks a lot for showing us another pic of the cute mouse but this time I want that curry puff :)

a curry puff? haven't tasted that one yet! looks like the mouse beat me to it.

Thanks for all the comments.

The NUS Centennial celebrations was from July last year and ended June this year.

Twisted, you have been in Singapore for so long, you should try a curry puff!! The easiest place to get one is at the Old Chang Kee kiosk all around Singapore.

In another 2 years, my house will be 100 years old...and I feel like I am rapidly catching up!

What a great sculpture !
and thanks for sharing all the moon cakes too.. delicious!